Manassas album of outtakes to be released in September 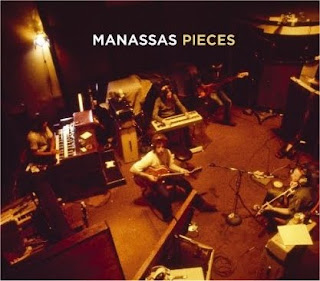 On September 22, 2009, Stephen Stills, singer, songwriter and multi-instrumentalist will release "Manassas - Pieces", a 15-song collection of outtakes and rarities.

"The bits and pieces we were silly enough to leave off", Stills writes in the liner notes. Manassas, the country rock band he formed in 1971 with Chris Hillman of the Byrds and the Flying Burrito Brothers, released two albums: a self-titled two-disc set in 1972 and "Down the Road" in 1973.

"Pieces" includes alternate versions of two "Down the Road" songs, "Do You Remember the Americans" and "Lies", the latter featuring Joe Walsh on guitar. It also features Manassas versions of "Word Game" and "Sugar Babe", which first appeared on "Stephen Stills 2" in 1971, as well as "Like a Fox", which features a then-fledgling Bonnie Raitt on backing vocals.

In the "Pieces" liner notes, Stills writes fondly of Manassas as "the first steel-guitar-driven country/rock band that any of us can remember...Whatever else has been said about this time of immense creativity, what Manassas turned out was a collection of material that remains the precursor of virtually all of the Nashville country rock productions that followed during the next decade. The energy is unrepentant, the creativity irrepressible, and the value of these recordings irrefutable.""