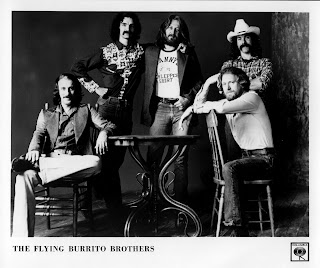 Chris Ethridge, a founding member of The Flying Burrito Brothers, has died.

Chris Ethridge left the FBBs after the group recorded its first album, "The Gilded Palace of Sin”, in 1969.

He eventually returned to work as a studio and touring musician, playing with The Doors, Linda Ronstadt, Ry Cooder, Randy Newman, Jackson Browne, Arlo Guthrie, and many others.

He also participated in the revival of the Flying Burrito Brothers in 1975, playing bass on one of the two LPs they released in the mid-seventies (Flying Again), and he appears on two live CDs recorded during this era ("From Another Time" and "The Red Album").

He was also a member of the L.A. Getaway among many others.

His last contribution to The Flying Burrito Brothers was some vocals on the "Eye Of The Hurricane" CD from 1994.
Posted by BYRDS FLYGHT at 4:10 PM