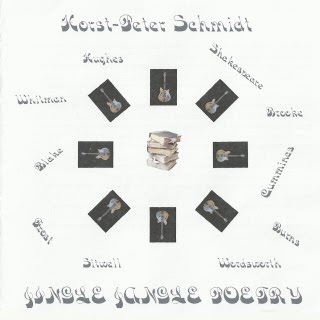 Strongly Recommended by Byrds Flyght to all those who miss the chiming guitar riffs that McGuinn unfortunately abandoned (or nearly).

Prolific singer/songwriter Horst-Peter Schmidt takes a break from writing the lyrics on his latest full-length release "Jingle Jangle Poetry”. This "theme” album combines the verse of poets and bards with Schmidt’s own compositions and his unmistakable 12-string guitar riffs. The result is a very pleasant listening experience that showcases both Horst-Peter’s Roger McGuinn discipleship and his reverence for inspirational poetry that has stood the test of time. Love, hope, the beauty of nature, the perseverance of the human spirit and optimism are pervasive themes in the poetry that Schmidt has set to music. Horst-Peter continues to channel Roger McGuinn through his Rickenbacker 12-string play and his vocals, and he borrows some of the recording techniques from McGuinn’s self-produced Limited Edition album. Byrds fans will be most delighted with the mid-tempo "Red Red Rose” (Robert Burns), "Stopping By Woods On A Snowy Evening” (Robert Frost) and "Who Knows If The Moon’s (A Balloon)” (e. e. Cummings). Horst-Peter’s Rickenbacker 12-string riffs are more muted on the other tracks, and Schmidt employs the use of synthesizer/programming effects on several songs. While this is a departure from his usual chiming folk-rock material, "Jingle Jangle Poetry” continues to reflect Horst-Peter Schmidt’s growth as an artist. I challenge you to find another contemporary musician who has expanded on the influences of his musical predecessors as distinctively as Horst-Peter has. "Jingle Jangle Poetry” is the latest jewel in the crown of the Crown Prince Of 12-String!