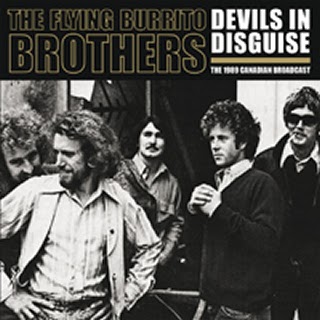 The Flying Burrito Brothers' concert broadcast by WMMR at The Sigma Studios in Philadelphia in 1971, which was released on CD in 2012, has now (October 2013) been released on vinyl as well as a double LP with gatefold cover.

The title is "Devils In Disguise - 1971 Live Broadcast"

This recording has been circulating for decades on bootleg tapes and CDs.

Note: we have some doubts about the legality of this release. It's probably unauthorized.
Posted by BYRDS FLYGHT at 9:32 AM