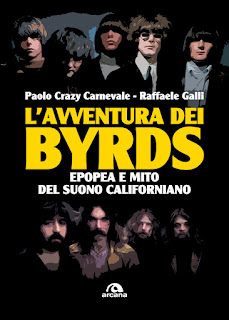 The book came out at the end of September 2018 and is published by Arcana, the most important publishing company for musical books in Italy. In the seventies, they released the Italian version of Anthony Scaduto’s  biography of Bob Dylan, and they still have the autobiography of Frank Zappa in their catalogue.

The book includes the story of the Byrds, of their records, and of the tentative reunions through the years.

In the third part, there is a discography, a commented bibliography and a selection of the best covers of their songs.

And finally the interviews, done exclusively for the book (with Roger McGuinn, Gene Parsons, John York, Jimmi Seiter, Sid Griffin, with fans Pietro Noè and Thomas Aubrunner), and a story by Bill Sweeney about the penultimate Byrds concert and a never released memorial written by Skip Battin in the mid-eighties.

The book is written in Italian and is available from:

https://www.ibs.it/avventura-dei-byrds-epopea-mito-libro-paolo-carnevale-raffaele-galli/e/9788862315470
Posted by BYRDS FLYGHT at 8:59 AM