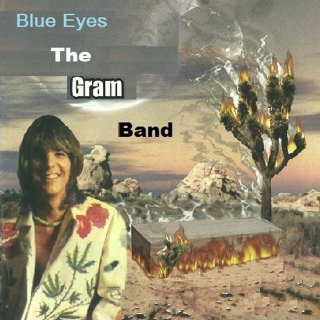 “Blue Eyes” is the title of a new CD of newly recorded Gram Parsons covers by “The Gram Band”, a side project of Chris James, the current leader of The Burrito Brothers.

Description of Sources for The Gram Band CD

All songs written by Gram Parsons except where indicated.

1.  Blue Eyes (Recorded late 1967, released on LHI Records March 1968). The least obscure of all the tracks here by The Gram Band, this was the opening song on “Safe At Home” by the International Submarine Band, Gram Parsons’ 1st album. This birth-of-Country-Rock LP was what essentially got Gram into The Byrds.

2.  November Nights (Solo 1966 & Gram Parsons & The Like 1965). The song is among the solo recordings of Gram taped on a Sony 500 reel to reel recorder in Winter Haven, Florida in 1965 & ‘66 by his friend Jim Carlton (whom Gram met in 1959 - they remained friends through high school and the rest of his life). This one is from December 1966. Before that Gram recorded a demo in late November 1965 with his group The Like (which soon transformed into the International Submarine Band) at the end of a Brandon DeWilde audition session for RCA in NYC in which the band was the back-up group. They knocked out “November Nights” and “I Just Can’t Take It Any More” at the end of the day. It was produced by Marty Ehrlichman, who managed, among others, Barbara Streisand and John Barry. Found on the CD “Fallen Angels” (1999 BMG Camden Deluxe Holland).
Peter Fonda released a single of Gram’s “November Nights” in 1967 on the Chisa label. Gram and Peter had become good friends. Fonda put Gram and the ISB in his movie “The Trip”. It was Fonda who first introduced Gram to The Byrds. Peter was well acquainted with the famous group. Replacing David Crosby in The Byrds was, undoubtedly, the biggest break of Parsons’ career.

3.  More And More (Rehearsal 1972) Written by Merle Kilgore. This is one of two songs, not on any of Gram’s albums, found on five audio cassettes that were in the possession of the late Rick Grech (who co-produced “GP” with Gram). Yet another great but obscure country classic. This one was done by Webb Pierce. Like most (if not all) of these tunes, Gram probably would have recorded this if he had lived longer. Side note: Chris James (leader of The Gram Band) lived with Debbie Pierce, Webb’s daughter, in the early 1980s in Nashville. “I remember a few times going over to Webb’s house with the guitar shaped swimming pool and seeing ol’ Webb sitting in the dark, listening to the radio and drinking the end of his life away,” Chris recalls. Furthermore, James played keyboards on Merle Kilgore’s final album.

4.  Everybody Loves A Winner (The Flying Burrito Brothers w/ Clarence White, Palomino Club, LA, June 8, 1969) Written by Booker T. Jones/Bill Williams. Here is a great example of Gram’s love for Rhythm & Blues music. His version of Cosmic Country-Rock incorporated this element. A recording exists of Gram singing this song at the Palomino in 1969 with the brilliant guitarist, Clarence White of the Byrds sitting in with the Burrito Brothers. This song is along the same lines as “The Dark End Of The Street” and “Do Right Woman”, the R&B classics from “The Gilded Palace of Sin” (the 1st Burrito Brothers album).

5.  Aint No Beatle, Aint No Rolling Stone (Hotel room rehearsal mid-1972). This is the other song from Rick Grech’s cassettes that isn’t on any of the albums. The sound quality on this ultra-rare Gram Parsons original is poor, recorded on a portable cassette recorder. It features just Gram singing and playing guitar while someone (probably Grech) is playing violin much too close to the microphone (ruining the recording). Not only is it a charming personal statement, it is the last unreleased Gram Parsons song.

6.  Don’t Let Her Know (Fallen Angels Live at Oliver’s Club, Boston, March 1973) Written by Buck Owens. Here is a fine example of Gram’s strong love for classic country music extending to lesser known songs. Parsons is probably more responsible than anyone else for turning a younger rock audience on to great country songs. Buck was one of his favorites. On a poor quality audience tape from the performance in Boston 1973, you can hear Gram introduce this one with these words: “This is for all of you people who didn’t quite get turned off by Hee-Haw before you got a chance to dig Buck Owens. He was really a gas before he started strapping on that red, white & blue guitar (little bit of applause). And he was. I really mean it. He did some silly things, ‘I’m-a pickin’ and he’s a-grinning’, whatever.”

7.  I Just Can’t Take It Any More (Solo 1966 & Gram Parsons & The Like 1965). Another song from the solo recordings of Gram taped in Winter Haven by Jim Carlton. This one is from December 1966 and, with “November Nights”, was recorded by Gram’s rock group, the Like at the end of the Brandon DeWilde RCA session. Dylan-esque and very much a product of the times, it’s a pretty good, though primitive and rough, studio recording.

8.  Out Of Control (Flying Burrito Brothers at the Seattle Pop Festival Sunday, July 27, 1969) Written by George Jones/Darrell Edwards/Herbie Treece. A tape exists of this performance by the Flying Burrito Brothers in Seattle ‘69. This is a song they performed that day that isn’t on any of the group’s or Gram’s albums. Another obscure, yet great country classic. Like “You’re Still On My Mind”, Gram’s debut on “Sweetheart of the Rodeo” by the Byrds, this one was originally done by George Jones.

9.  Wheel Of Fortune (Solo 1965). A gorgeous Parsons original from the solo recordings taped in 1965 & ‘66 by Gram’s friend Jim Carlton in Florida. This one is from December 26, 1965. Gram was in his folksinger phase, having attended Harvard and more recently hung out and played quite a lot in Greenwich Village with friends that included John Phillips, Barry Tashian and Richie Furay. The song is so pretty and well constructed that it’s almost certain that had Gram lived, he would have brought it back out (like he did with “Brass Buttons”, a song just as old that surfaced on his final album).

10.  One Day Week (Recorded September 14th, ‘66 by the International Submarine Band, this was Columbia single 4-43935). This Gram Parsons original was actually released and the recording, though somewhat primitive, is good. But it fell into immediate obscurity. It does not appear on any of the six studio albums that feature Gram. The group was performing Beatle-esque Pop-Rock here, one year before they underwent significant personnel changes and made their landmark Country-Rock album “Safe At Home” on LHI Records. Note: Chris James played on the reunion CD by the ISB recorded in the late 1980s.

11.  Widow Maker (WBCN Radio, Houston, Texas, March 23, 1973) Written by Jimmy Martin. Parsons and Emmylou Harris visited this radio station for an interview and impromptu performance (Gram playing acoustic guitar with just the two of them singing). They might have done the same thing at other radio stations but this is the only recording of the song in circulation. Other songs they performed that day are on Gram’s albums.

12.  Apple Tree (One of two Gram Parsons songs on Johnny Rivers, “Slim Slow Slider” Imperial LP 16001 released in 1970). Johnny Rivers made the acquaintance of Parsons in 1969 and got two unreleased songs from Gram for his album. “Apple Tree” was not recorded by Gram (at least no version has surfaced). The other song “Brass Buttons” wound up on Gram’s final LP “Grievous Angel” in January 1974. In 2000 the Nashville Country-Rock group, Mr. Hyde, with Chris James singing, released their version of “Apple Tree”.
Posted by BYRDS FLYGHT at 2:15 PM