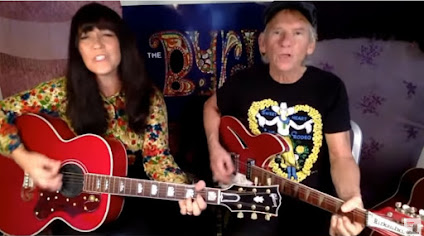 "This week, we paid special tribute to The Byrds! When we first got together, we were coming from two different musical backgrounds -- Maura from a power-pop and Americana background and Pete from the world of rock 'n roll, folk and blues. We did share some common ground in our musical tastes, including a few critical bands like The Beatles, Buddy Holly, The Everly Brothers, Emmylou Harris and Patsy Cline. But the band we both loved above all others was The Byrds. Imagine our joy when Roger McGuinn agreed to play his signature chiming Rickenbacker 12 on our Life Is Large album back in 1995! This week, Pete gave his own 12-string Ricky a good workout and we let those modal harmonies fly as we played our favorite songs by this influential band. Scroll down to see a list of the songs we played along with songwriter credits.

Here's a list of the songs we played during this stream:

5) Here Without You - (Gene Clark) (Kennedys version on "Evolver" CD)