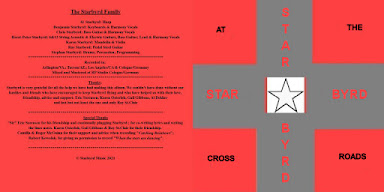 Starbyrd, the legendary Byrds-sounding band from Cologne, Germany, led by Horst-Peter Schmidt (the crown prince of the Rickenbacker 12-string), have a new CD out.

It’s called “At The Crossroads”.

(All songs written by H.P. Schmidt except where noted)

04 The World Is Standing Still

07 I Wonder How You're Doing

09 But We Keep On Rocking

11 I Fell In Love With You Again

It is already available at

and will be available at all the major online stores (Amazon, Apple etc...) from June 1st on.

Maybe you’ve got your shot of the vaccine already, but even if you have, get your shot of Starbyrd (and that marvellous Byrds Sound from the 60s) NOW!