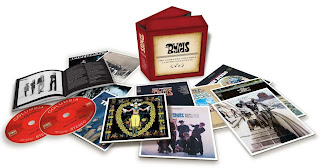 A new Byrds Box Set has just been released by Sony.

Some of the covers are actual scans of used LPs, as one can clearly notice ringwear on the back.

The CDs are the remastered versions first issued in the 90s with bonus tracks.

There also is a 40 page booklet with all recording details (musicians, dates, etc…) and track-by-track comments.

Nothing new, but a nice object for completist collectors.