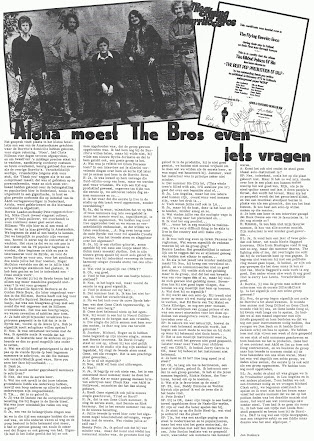 ALOHA was a Dutch rock magazine published between 1969 and 1974.

In issue #42 (November 1970), they featured a long interview of The Flying Burrito Brothers by Jan Donkers, recorded during their October 1970 visit to Europe.

Click on the image to see it at a readable size.

The interview is in Dutch. At first I thought I'd translate it to English, but it's very long and I stopped on the way. So if a good soul can provide an English version, I will gladly publish it here. Thanks in advance.

One of my great memories is seeing the Byrds and Burrito Brothers share the stage at Carnegie hall, when Gram Parsons was still in the band. I caught the later Rick Robertson era Burritos too, also memorable!

By the way, today the website 3 Quarks Daily features my long essay on the Byrds, "My Fan Notes." It's the confessions of a devoted fan, from 1965 through to the early 1970s. Your readers might enjoy it: