Rare picture of Gene Clark and his band in 1976 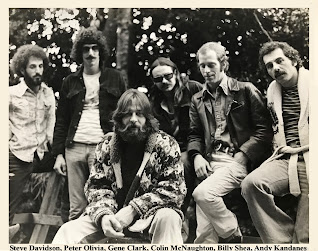 Our regular correspondant David E. has sent us a photograph of Gene Clark and his band from 1976.

The band was called The Mendicino Rhythm Section. They took their name from being based in that area

The picture was provided by Jay Dravenstadt.

Jay's accompanying text is as follows:

" This promotional photo was tacked up on the cork board at the entrance to The Oaks Café in 1976.

I thought you’d like to see this since it’s probably one of the only photos of this band (at least I’ve never seen another ). "

Many thanks to both of them for sharing it.