Poster for The McGuinn-Hillman-Stuart Tour 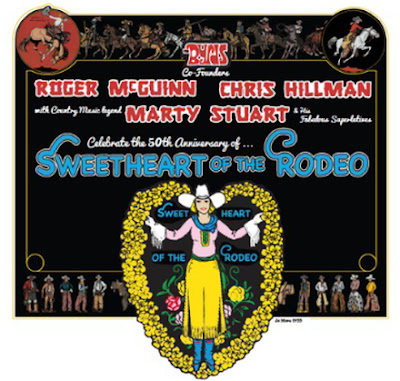 Posted by BYRDS FLYGHT at 10:16 AM No comments:

McGuinn, Hillman & Stuart - Two Nights Ago In Nashville...Sweetheart Of The Rodeo 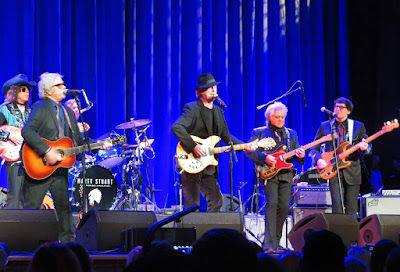 Posted by BYRDS FLYGHT at 10:10 AM No comments:

Roger McGuinn & Chris HIllman tour of Sweetheart Of The Rodeo

The Byrds' Roger McGuinn and Chris Hillman will mark the 50th anniversary of the band's pioneering country-rock album Sweetheart of the Rodeo with a tour that begins this summer. Marty Stuart and his Fabulous Superlatives will also join McGuinn and Hillman onstage, where the Byrds duo will perform songs and tell the stories behind the 1968 LP, one of Rolling Stone's 500 Greatest Albums of All Time. "Driven by new member Gram Parsons, the Byrds nailed a bold Nashville classicism, dressing Bob Dylan and Merle Haggard songs in steel guitar and rock & roll drive," Rolling Stone wrote in 2012. "The results set the stage for country rock."
"On March 9, 1968, Roger McGuinn and I along with many fantastic musicians began recording the Sweetheart of the Rodeo album at Columbia Studios in Nashville," Chris Hillman said in a statement. "It was truly a pivotal moment in our lives taking a turn toward the music we always felt a strong kinship with. We are honored that it has left a strong, long lasting impression on country and rock music."
McGuinn added, "We're all looking forward to taking the fans through the back pages of the recording. The concert will include songs that led up to that ground breaking trip to Nashville and all the songs from the album."
McGuinn and Hillman will also appear onstage together during Marty Stuart's Late Night Jam at Nashville's Ryman Auditorium on Wednesday. Stuart performs live with a 1954 Fender Telecaster previously owned by guitarist Clarence White, who played on Sweetheart of the Rodeo.
"The Byrds' Sweetheart of the Rodeo recording stands as a milestone in American music. I bought my first copy of the record in 1972," Stuart said in a statement. "Upon my first listen, I was mesmerized at the effect of the combined power Country music, Rock & Roll, Bluegrass, Gospel and Folk music had on me. From that day forward, I considered Sweetheart of the Rodeo a blueprint as to how I should live my musical life."
Organizers announced the first five Sweetheart of the Rodeo tour dates, with more gigs set to be announced soon.
Sweetheart of the Rodeo TourJuly 24 – Los Angeles, CA @ Ace HotelJuly 29 – Saratoga, CA @ Mountain WinerySeptember 18 – Albany, NY @ Hart TheaterSeptember 20 – Hopewell, VA @ Beacon TheatreOctober 3 – Akron, OH @ Akron Civic
Posted by BYRDS FLYGHT at 5:58 PM No comments: