"This book/CD set presents Clarence's early but fully realized acoustic guitar style, as demonstrated in the recordings he made at home in 1962. These songs were included in the "33 Acoustic Guitar Instrumentals" CD. The book isn't a survey of his entire career but rather focuses on the core elements of his early style. The intent is to provide an entry point for intermediate players to understand and begin to play in this style, and to impart the flavor of Clarence's early musical environment. It's not a survey of music from his entire career, and the biography, by Roland, covers the years that Roland lived with him. Disc 1 contains Clarence's renditions, plus Windows Media format video of Clarence playing two tunes. The book also has a biographical section by Roland, and a lot of great pictures."

You can get it from 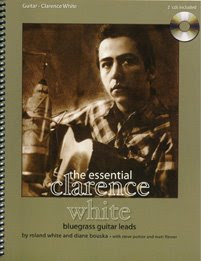