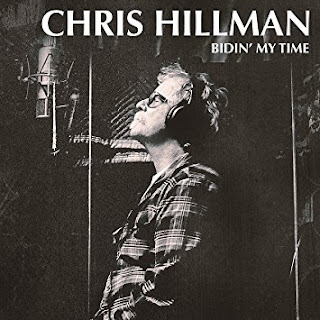 Bidin’ My Time, the first new solo album in more than a decade by CHRIS HILLMAN, a founding member of The Byrds, Flying Burrito Brothers, Manassas and the Desert Rose Band, will be released on Sept. 22 via Rounder Records. Tom Petty produced the album at his studio in Southern California, and Hillman’s longtime collaborator and co-founder of the Desert Rose Band, Herb Pedersen, served as executive producer.

The album kicks off with a new recording of Pete Seeger’s and Welsh poet Idris Davies’ “The Bells of Rhymney,” which the Byrds recorded for their debut album, Mr. Tambourine Man. Crosby and Pedersen contribute harmonies to the tune. “I decided to cut it again because I wanted to sing with David and Herb, two great tenors,” Hillman said in a press release. “David just loves Herb’s singing, and at 75 years old, David is still a powerful singer, one of the best I’ve ever worked with or been around.”

Another Byrds nod, “Here She Comes Again,” was co-written by Hillman and McGuinn, and until now, had only been recorded on a live album in Australia. Hillman plays bass on the track—the instrument he originally played with the Byrds but hadn’t picked up in more than 30 years. “She Don’t Care About Time,” the original B-side to “Turn! Turn! Turn!,” was written by Byrds co-founder Gene Clark, who died in 1991.


Hillman also reworks “Old John Robertson,” first featured on The Notorious Byrd Brothers in 1968, as “New Old John Robertson.” The album also includes interpretations of the Everly Brothers’ “Walk Right Back,” Petty’s “Wildflowers” and “When I Get a Little Money,” written by family friend Nathan Barrow. See the full track listing below.

Chris Hillman and Herb Pedersen (with John Jorgenson) have announced a series of tour dates for this fall.