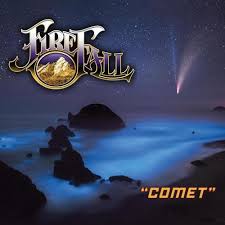 One can say that Firefall has a rather strong connection to The Byrds.

Not only was Michael Clarke their original drummer (recording their first three LPs with them), but other original members Jock Bartley and Mark Andes were members of The Chris Hillman Band in the 70s, and Jock Bartley was a member of Gram Parsons’ Fallen Angels.

More, the original founder and leader of Firefall was Rick Roberts, who replaced Gram Parsons in The Flying Burrito Brothers and became the leader of that band when Chris Hillman left.

Rick Roberts was also a member of the Gene Clark Byrds Tribute bands in the mid-80s.

Firefall underwent many lineup changes over the years, always with Jock Bartley at the helm.

Firefall will release a new album of studio recordings on December 11, titled COMET.

It is announced as "Firefall's first album of new music in 25 years".

See and hear a Mark Andes interview and a preview of "Way Back Then" here:

Rick Roberts  and Larry Burnett aren't part of the reunion but they play together again.